Our Secret Powers: Telepathy, Clairvoyance and Precognition, A short history of nearly everything paranormal 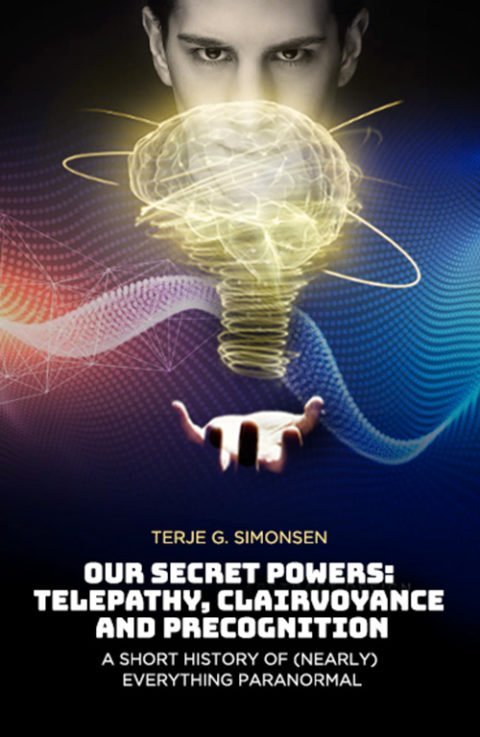 Is the paranormal normal?

Many readers will be surprised when learning that reputable scientists, among them several Nobel laureates, have claimed that telepathy is a reality. Their curiosity will increase when reading that Cleopatra’s lost palace and Richard III’s burial place were recovered by means of clairvoyance. And some will think it to be science fiction when finding out about Stargate––the espionage program where the American military and CIA engaged in the development of psychic spies!

Simonsen, a Norwegian historian of ideas, introduces an array of entertaining paranormal tales from history, archaeology, anthropology and psychology, and presents scientific research that has provided fascinating results. He argues that the stories we hear about telepathy, clairvoyance and precognition ought not to be dismissed as superstition

In step with spiritual and occult traditions, the author suggests that consciousness is not limited to our own head. Rather he thinks that all humans (and perhaps all living beings) are linked together in a “Mental Internet.’ Via this network we may exchange ‘telepathic emails’ with friends and family and make clairvoyant ‘downloads’ of information.  Thus perhaps what we usually call ‘supernatural’ is completely natural but little understood communications via this Mental Internet?

Our Secret Powers gives us a thoughtful and critical analysis of a controversial subject and would make an excellent travel companion.

Praise for Our Secret Powers:

‘Psychology is the scientific study of behavior and experience. Parapsychology is the scientific study of behaviors and experiences that appear to transcend mainstream science’s understanding of time, space, and energy.  Most books on this topic are complex and formidable, but Our Secret Powers is an exception. Terje Simonsen has written an overview of parapsychological phenomena that is entertaining as well as informative.  Simonsen, a historian, approaches remote viewing, dream telepathy, foretelling future events, and the like not only from a historical perspective but from anthropological, psychological, and popular cultural perspectives as well.  His non-judgemental attitude and his use of wit, humor, and anecdotes will delight both debunkers and advocates of parapsychological data. This is an outstanding book and it deserves all the attention it can get. Not only is Our Secret Powers a book for all seasons, it is a book for all reasons!’
Stanley Krippner, PhD, Professor of Psychology, Saybrook University, Co-editor, Varieties of Anomalous Experience: Examining the Scientific Evidence

‘As an encyclopedic introduction to the psychic side of the fascinating but puzzling domain known as the paranormal, there is no better choice than Our Secret Powers. Ranging from shamanism to skepticism, psychic spies to fundamental physics, and much more, Terje Simonsen deftly covers the paranormal landscape with a light but accurate touch. This book will appeal to anyone who wonders whether all those tales about ghosts and psychic phenomena that saturate the world of entertainment are just pure fantasy, or something more. Here you will find a sound introduction to the “something more.”’
Dean Radin, PhD, is Chief Scientist at the Institute of Noetic Sciences (IONS). He is the author of the award-winning The Conscious Universe (HarperOne, 1997), Entangled Minds (Simon & Schuster, 2006), and the 2014 Silver Nautilus Book Award winner, Supernormal (Random House, 2013).

‘There is a change occurring in science. Consciousness, once considered solely physiological is now being shown across a spectrum of disciplines to have a nonlocal aspect and this is being integrated into science as a fundamental just as Max Planck told us. Terje Simonsen in Our Secret Powers has put together an engaging and informed overview of this evolution (in consciousness) that is worth your attention.’
Stephan A. Schwartz, PhD, Fellow, William James Center for Consciousness Studies, Sofia University, Palo Alto, California. Author of The 8 Laws of Change

‘Terje Simonsen’s sense of humor and fair coverage of a vast and complex area provides a good introduction to a topic that is often tainted by shallow thinking and uninformed bias despite considerable scientific evidence for its reality and its intrinsic fascination to most people.’
Etzel Cardeña, PhD, Thorsen Professor of Psychology, Lund University, Sweden. Editor-in-Chief of the Journal of Parapsychology and co-editor of Parapsychology: A Handbook for the 21st Century.

‘The American press media commented that the Norwegian Prime Minister spoke better English than Donald Trump, which is no doubt true. This book evidences also a superb use of English, admittedly in a journalistic manner but also highly captivating, jovial and easy to read style. This is not easy given the topic is highly controversial and many of the more scientific findings demand expertise in specialist areas. To successfully write about this area also demands an optimal combination of skepticism and open-mindedness. On the whole I would say Terje Simonsen has succeeded.’
Adrian Parker, PhD, Clinical psychologist. Parker is Professor at Gothenburg University, Sweden where he is currently carrying out research into lucid dream states and exceptional experiences amongst twins and teaches an international course on ‘Consciousness Studies and Psychical Research.’

‘Terje Simonsen is a remarkably balanced and insanely well-read guide into a literally impossible subject. He employs the elegant metaphor of a Mental Internet remembering and connecting everyone to explore an astonishing array of psi phenomena: from occult or intuitive archaeology, military mysticism, and cold war clairvoyance; through paranormal paranoia, James Bond (sort of), anthropology, Goethe, and (my favorite) a wise vampire hunter; to hippie physicists, entangled twins, a telepathic terrier, the nature of time, and reincarnation memories. The international scope of the figures and cases discussed is particularly welcome and especially important. The final result is an optimistic and collective vision of “our secret powers,” a species-wide vision of a new, and yet ancient, superhumanity.’
Jeffrey J. Kripal, PhD, J. Newton Rayzor Professor of Religion, Rice University, Houston, Texas, author of Authors of the Impossible: The Paranormal and the Sacred

Our Secret Powers was very well received by reviewers and academics when it was published in Norway in 2013:

‘a sympathetic, charming and personal book,’ ‘easy to read,’ ‘a fine introduction to the misty landscapes of parapsychology.’
Tom Egeland, fiction author and critic, published in 26 countries

‘a great, exciting and well-written book’
Jan-Erik Ebbestad Hansen, PhD, Professor of the History of Ideas, University of Oslo

‘This is an enchanting book––brimming with knowledge about the esoteric and the paranormal, presented in a joyous way that entertains, as well as educates, the reader.’
‘Simonsen gives the reader huge amounts of information, but manages to present it in a light, funny and eloquent way.’ ‘I can recommend Simonsen’s book for anybody interested in the paranormal.’
Anne Kalvig, PhD, Professor of Religious Studies, author of The Rise of Contemporary Spiritualism

‘The author overviews an impressively broad scope of the research that has been conducted about- and within the paranormal field.’
Vinjar Fonnebo, MD, PhD, director of the National Research Centre in Complementary and Alternative Medicine at the University of Tromso