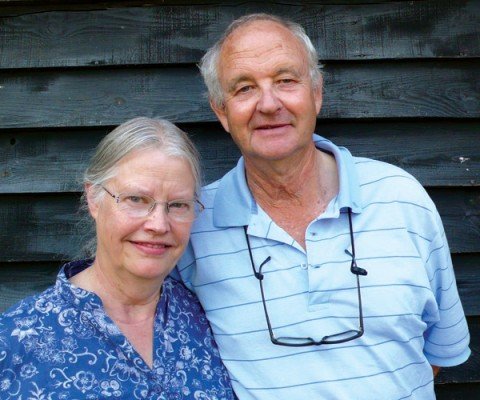 John Saunders left school in South Africa, suffering from a mild, but undiagnosed, form of dyspraxia. During a year spent studying medicine—while attending an occasional English class—he learned that though a clumsy dissection of a frog resulted in much blood and a fail mark, a clumsy analysis of a poem (if reasonably well expressed) might be considered to show originality and be awarded an A. At the end of the year he changed to English and has not looked back. He now has post-graduate degrees from Oxford and London and a Diploma in Linguistics from Cambridge. Following his retirement from Chichester University, a mild form of hypochondria and nightly access to the internet have enabled him to renew his interest in medicine.

Claire Saunders chose an indoor rather than an outdoor life when, at the age of sixteen, she failed her Queen’s Guide Award. On graduating from Oxford, she accepted a post lecturing in English at University College Dublin. After two years she realized that she much preferred teaching to research and moved to the English department at Oxford Girls High School. Marriage and two children followed but she was able to maintain her interest in teaching by becoming a tutor for the Open University and, later, to catch up on research by taking an MA at Sussex University. She was working on a PhD on Shakespeare’s stage images when what she took to be symptoms of the menopause turned out to be a third pregnancy. She chose to terminate her PhD. When she retired she was Head of English at Lavant House School.

John and Claire Saunders have written independently on a wide range of literary topics (from Chaucer to Larkin). Their shared enthusiasm for the work of Shakespeare and his contemporaries has led to two previous collaborations: an edition of The Duchess of Malfi and, more recently, So You Think You Know Shakespeare?