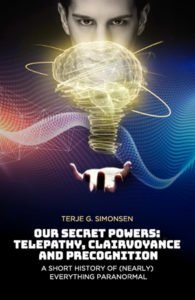 Our Secret Powers: Telepathy, Clairvoyance and Precognition, A short history of nearly everything paranormal has been endorsed by the following leading parapsychologists:

Psychology is the scientific study of behavior and experience. Parapsychology is the scientific study of behaviors and experiences that appear to transcend mainstream science’s understanding of time, space, and energy.  Most books on this topic are complex and formidable, but Our Secret Powers is an exception. Terje Simonsen has written an overview of parapsychological phenomena that is entertaining as well as informative.  Simonsen, a historian, approaches remote viewing, dream telepathy, foretelling future events, and the like not only from a historical perspective but from anthropological, psychological, and popular cultural perspectives as well.  His non-judgemental attitude and his use of wit, humor, and anecdotes will delight both debunkers and advocates of parapsychological data. This is an outstanding book and it deserves all the attention it can get. Not only is Our Secret Powers a book for all seasons, it is a book for all reasons!

As an encyclopedic introduction to the psychic side of the fascinating but puzzling domain known as the paranormal, there is no better choice than Our Secret Powers. Ranging from shamanism to skepticism, psychic spies to fundamental physics, and much more, Terje Simonsen deftly covers the paranormal landscape with a light but accurate touch. This book will appeal to anyone who wonders whether all those tales about ghosts and psychic phenomena that saturate the world of entertainment are just pure fantasy, or something more. Here you will find a sound introduction to the “something more.”

Dean Radin, PhD, is Chief Scientist at the Institute of Noetic Sciences (IONS). He is the author of the award-winning The Conscious Universe (HarperOne, 1997), Entangled Minds (Simon & Schuster, 2006), and the 2014 Silver Nautilus Book Award winner, Supernormal (Random House, 2013).